Team RAC, also known by it abbreviation RAC, is a British former GPGSL racing team. It was founded by team owner Paul Willins. The team entered the GPGSL in Season 1, as one of the founders teams. After just one race the team was never seen again.

Powered by BMW engines and Dunlop tyres, the team had team owner Paul Willins and Bobby Neil as their drivers. During the first round at the Austrian Grand Prix both drivers were way off the pace, finishing the race at the back of the field. After the race Willins vanished, leaving the GPGSL board with no option but to close the team, with Neill's contract being honored by the new team Alpha Motorsports.

RAC held the record for fewest race appearences for ten straight seasons, as they only showed up for the first race of Season 1. The record is now held by Pulsar Racing Team, which was supposed to enter in Season 11, but had to withdraw before the season even started. 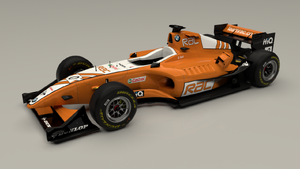 S1: Only raced once, as the team withdrew after the opening round
Add a photo to this gallery
Retrieved from "https://gpgsuperleague.fandom.com/wiki/Team_RAC?oldid=13011"
Community content is available under CC-BY-SA unless otherwise noted.