S1 Australian GP
KBR, also known as Kyran Brazier Racing or as KBR Abarth, is a British former GPGSL racing team. It was founded by team owner Kyran Brazier. The team entered the GPGSL in Season 1, as one of the founders teams. It stayed in the series until the end of that season when Abarth decided to end the project.

The team entered the GPGSL with work supply by Italian manufacturer Abarth and Bridgestone tyres. The drivers for the season were team owner Kyran Brazier and Keeley Grant. Grant took the team's first and only win at the Brazilian Grand Prix, and was a constant challenger for top 6 results. Brazier had a decent start, but dropped in form after his 3rd place finish at the Monaco Grand Prix, only scoring points on 2 further occasions.

Despite finishing the season in 4th in both the constructors' and drivers' championship, Abarth pulled the plug on the project, which meant the end for KBR in the GPGSL. 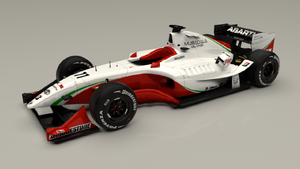 S1: First and only season for the team, 1 win and 4th in the standings
Add a photo to this gallery
Retrieved from "https://gpgsuperleague.fandom.com/wiki/KBR?oldid=13622"
Community content is available under CC-BY-SA unless otherwise noted.