2KF1 Racing is an Australian racing team. It was founded in 2010 by Aidan Keranen and Aaron Reed in regional Victoria, Australia. The team went through changes, before becoming 2KF1 in mid-2011.

The team entered the GPGSL midway through Season 13. Keranen had previously taken temporary ownership of True North Racing after the 2nd disappearance of their owner Dan Mills. After round 8, he rebranded the team to 2KF1 Racing for the final 6 races. 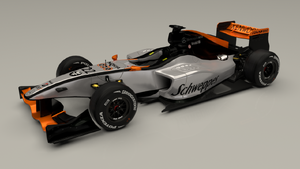 S13: Midseason entry, as a rebrand of TNR after Keranen took temporary ownership
Add a photo to this gallery
Retrieved from "https://gpgsuperleague.fandom.com/wiki/2KF1_Racing?oldid=13334"
Community content is available under CC-BY-SA unless otherwise noted.